Ever have one of those projects that you’ve been dying to see done, but for some reason, you never get around to it? This lantern is just that project.

About two and a half years ago, I arranged to meet with a man in the parking lot of a far off grocery store. He had a lantern that I wanted to look at. I use the term “lantern” lightly because what he really had was an idea of a lantern; old, decrepit, bent, and in pieces. Of course, I fell in love with it. I actually paid him for the honor of taking these bits and pieces of lantern home with me.

It wasn’t until a few days later, after having a lovely dinner, that I told my husband about the lantern. I wanted him to help fulfill my vision of it being filled with moss and white lights and get it ready for the store. It is a credit to the patience and love that my husband has for me that after more than 20 years of hearing about my “visions,” he did not immediately throw out the bits and pieces of lantern upon seeing the condition it was in.

Instead, on a Sunday afternoon where he could have been home watching football, he helped install the moss covered lantern with fairy lights in the shop. He also put the crowning touch to finish my vision. A red cardinal right inside. 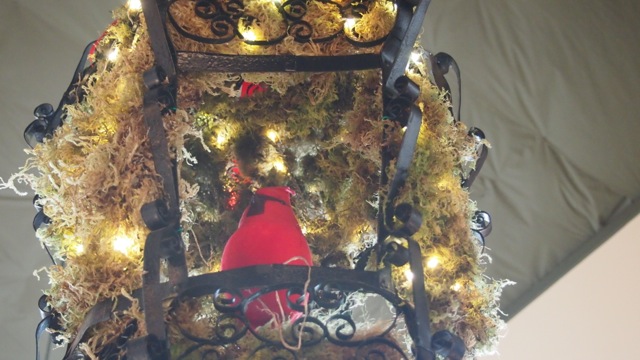 2 thoughts on “Vision of a Lantern Fulfilled”